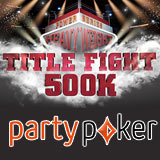 From the first of October the PartyPoker Heavyweight Title Fight tournament will have it's prize pool doubled from $250K to $500K.

Just some of the new changes at PartyPoker which also includes the new Party Poker Monster Series which guarantees $5 million this October.

Signup and get a Party Poker Welcome Bonus up to $500

Micro-stakes players can even get in on the action by winning their entry to the Heavyweight Title Fight from as little as $1.10.

From Monday to Saturday you'll find all three satellites tournament running every two hours around the clock at PartyPoker online.

On Sundays there are satellites leading up to the start of the Heavyweight Title Fight tournament every two hour up until 18:00.