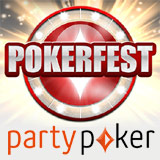 The Party Poker Pokerfest will now start from 25 October instead of the previously announced date the 27 September.

PartyPoker will compensate players for the delay by adding a $50,000 PokerFest freeroll to the schedule to apologize for the delay.

The Party Poker Pokerfest postponed series will have a delay of almost a month while PartyPoker updates their software this week. The series and schedule have since been removed from their website and there is no mention of the postponement.

There was a major update to the PartyPoker software which could have resulted in performance issues that would have affected the tournament series. The software issues are currently being resolved and PartyPoker took the decision to postpone the series till 25th October to ensure players aren't affected by the update.

The Party Poker Pokerfest schedule is currently being revised and will be published shortly to reflect the new dates and times of the events. All players that had registered early for the events prior the cancellation of the series will be refunded.

A $50,000 Pokerfest freeroll tournament will also be added to the schedule to apologize to players for any inconveniences that are caused by the delay.

"I apologise to our loyal players for having to delay this highly anticipated event. With a total prize pool of $2,500,000 up for grabs, we are not willing to take even the slightest risk with our players’ experience during the 80 events that make up Pokerfest. To make-up for the inconvenience, we have added a $50,000 freeroll to the updated schedule in appreciation of our customers’ loyalty." - Golan Shaked, Party Poker Tournament Director

The Party Poker deposit bonus codes are available to specific countries or currencies, players can use the relevant bonus code to claim their bonus.

Use the latest Party Poker deposit bonus codes to claim your bonus and welcome package.