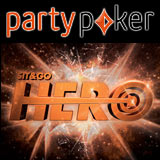 The special edition of the game has the features of the industry standard of SNG jackpot format.

The changes include one less players at the table, three-handed instead of four-handed. The bounty prize has also be removed and the cash is then added to increase the overall prize pool.

The Party Poker Sit & Go Hero Special Edition has been released as the poker industry standard for SNG jackpot tournaments.

The new three player SNG game no longer features the twist of the random bounty prize, these tournaments are only currently available at the $50 buy-in level on the launch.

Players can try out the new edition but currently limited to the $50 Sit & Go Hero SE buy-in level were the highest jackpot amount being more than $500,000.

There are also two other version of the game available Power Series Hero tournament and Trickett’s Hero.

Trickett’s Hero is a $100 buy-in game which features a million dollar jackpot but is four-handed and also features a bounty prize up to $100,000.

Play these games on PC or the mobile app version of PartyPoker which is compatible with smartphones, Android, iPhone and iPad.