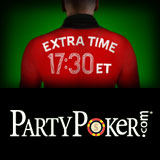 To celebrate the Euro 2012, play the PartyPoker Extra Time tournaments with a $1000 added to the prize pool. To make the deal even sweeter the top 10 players in each tournament will also win a football shirt of any of the 16 participating 2012 European Football Championship teams.

These low buy-in tournaments are only $1 and run on the same days as the European football fixtures. There are 19 PartyPoker Extra Time tournaments, don't miss out on your chance to score a 2012 Euro shirt on partypoker.com.

Win a 2012 Euro football shirt plus your share of a $1,000 prize pool in PartyPoker Extra Time tournaments, the buy-in for these events is only $1 and there are 19 tournaments running on the same days as the European football matches.

Partypoker bonus codes are available for several countries and currencies, use the bonus code when signing up for a free Party Poker account and get your PartyPoker bonus.

The top 10 players in every PartyPoker Extra Time tournament will win a football shirts of their choice from one of the 16 teams competing in the Euro 2012 - Poland, Greece, Russia, Czech Republic, Netherlands, Denmark, Germany, Portugal, Spain, Italy, Republic of Ireland, Croatia, France, England, Ukraine and Sweden

Winners will be notified by email within 72 hours and will receive a code which can be used to purchase the football shirt of their choice. All prizes must be claimed before the 1st September 2012, there is no cash alternative but players can win more than one shirt during the promotional dates.

Partypoker.com are not licensed, endorsed, sponsored by or affiliated with UEFA or the European Football Championship in any way, and no such relationship is claimed or should be inferred.