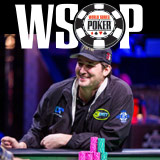 Phil Hellmuth wins 14th Bracelet in WSOP 2015 Razz Championship event 17, proving the poker legend still has what it takes to dominate at the WSOP.

Hellmuth has now secured his lead in the most WSOP bracelets won by a single player in the history of the World Series of Poker.

The Razz Championship event featured a field of 103 players with a first place prize of $271,105, the total prize pool was just short of a million dollars.

The PokerBrat has not only proven that he is a Holdem champion he is now a Razz legend after winning his 2nd bracelet for a Razz event, breaking his previous record for the most WSOP bracelets won.

Phil Hellmuth has also claimed the title of the most successful player at the World Series of Poker.

“I’m dedicating this, I lost a friend about a month ago, Dave Goldberg. I’m going to give this bracelet to his wife and kids. This is for Dave Goldberg. Goldy, I love you.” - Phil Hellmuth comments after winning his 14th WSOP bracelet.

Hellmuth has been dominating the World Series of Poker since his victory in the 1989 WSOP Main Event at the age of 24 years old.

Now aged 50, Hellmuth still has what it takes to bring home the gold and is determined to score his 15th WSOP bracelet at the 2015 World Series of Poker.

His shift from playing large fields of players in Holdem events to winning different poker game types with less players has really paid off. The competition is still tough as he is competing against players who specialize in Razz.

Hellmuth accumulated a solid chip lead ranking in 3rd place by the end of Day 2 and defeated Mike Gorodinsky in a grueling heads-up battle to win the title.