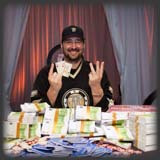 Phil Hellmuth wins 2012 WSOPE Main Event a Million Euros and WSOP bracelet number 13, this is Hellmuth's second bracelet for 2012. Hellmuth stated: “This is one of the most prestigious titles in poker and to get this one, it’s right up there with the world championship.” referring to his 1989 WSOP Main Event victory.

Hellmuth also secured his lead on Antonio Esfandiari for 2012 WSOP Player of the Year and will maintain his first place position unless October Nine player Greg Merson wins the 2012 WSOP Main Event.

Phil Hellmuth responded by saying “I played the best poker of my life in this tournament” after defeating Sergii Baronov heads-up in the 2012 World Series of Poker Europe Main Event in France.

Hellmuth's 2012 WSOPE Main Event victory pushes him ahead on most leaderboards, achievements and records, this win proved Hellmuth still has what it takes to be a World Champion.

“My game is constantly evolving. I tried some new things out that really worked this time. My game is never the same. You’ve got to constantly be improving, and that’s what I do.” - Phil Hellmuth

Phil Hellmuth will be crowned 2012 WSOP Player of the Year with the only risk of losing his title is if Greg Merson wins the 2012 WSOP Main Event. Merson has also had some impressive results winning a bracelet and three cashes at the 2012 WSOP, a Main Event victory from Merson would increase his position on the leaderboard and rob the Poker Brat of his Player of the Year title.