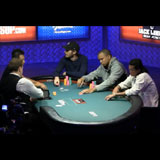 Phil Ivey was eliminated in 3rd place leaving Joe Cassidy vs Scotty Nguyen heads-up at the end of Day 3.

Ivey missed his 9th bracelet again after being denied victory earlier this week when he was heads-up with Andy Frankenberger in Event 17: Pot-Limit Hold’em. Phil Ivey is on fire at the 2012 World Series of Poker after boycotting the series in 2011 after Black Friday/Full Tilt Poker where players funds were seized.

The Tiger Woods of Poker misses another opportunity to add a non-holdem bracelet to his collection, but he currently leads the 2012 WSOP player of the year leaderboard in points.

Phil Ivey would have increased his WSOP bracelet earnings lead to 4th place sharing the position with Johnny Moss.

Phil Ivey misses his 9th WSOP Bracelet, the poker legend has once again failed to add another bracelet to his collection just after finishing runner up to Andy Frankenberger in Event 17 this week. The odds were in Phil Ivey favor being the chip leader, but playing against a tough field of players including the legendary Scotty Nguyen and Joe Cassidy as the final 3 remaining players.

Phil Ivey now has 46 in the money finishes in World Series of Poker events with a total earning of $5,610,289 prior to his latest win.

Watch all the action live on the World Series of Poker official website - WSOP Live Video Stream all the final tables including the main event and the 2012 WSOP Big One million dollar buy-in. For the latest news, results and updates visit wsop.com