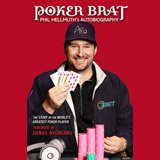 Look out for Poker Brat Phil Hellmuth's Autobiography, the story of the World's greatest poker player with foreword by Daniel Negreanu.

The poker brat's official autobiography is finally being released and will sure be an interesting read for poker fans. The poker legend tweeted for fans to help him decide on the cover for his new book.

Phil Hellmuth Jr has earned fourteen WSOP bracelets, the most bracelets earned by any player at the World Series of Poker. Not only that, Hellmuth also holds the record for the most WSOP cashes and final table appearances.

The Poker Brat Phil Hellmuth's Autobiography is sure to be packed with personal stories and highlights of his successful poker career and life story.

Phil Hellmuth Jr is a professional poker player with a record amount of fourteen WSOP bracelets since his first win the 1989 World Series of Poker Main Event.

Hellmuth is also a Poker Hall of Fame member who has stood the test of time and contributed greatly to the game as an ambassador of poker.

Known for his outrageous outbursts and unique personality, the Poker Brat is a fitting poker handle.

His first big break into the poker scene was his victory against Johnny Chan heads-up in the 1989 WSOP Main Event. At the time Hellmuth was the youngest player to win a Main Event being just 24 years old.

Earning more that $12 million in WSOP cashes ranking fourth place for most money won at the World Series of Poker.