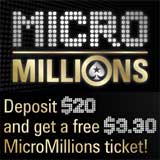 Get a free Poker Stars Micro Millions 2 tourney ticket worth $3.30 when making a deposit of $20 or more on PokerStars. The Pokerstars Micromillions II schedule has been released and features 100 Micro Stakes Poker tournaments.

The online poker tournament series kicks off from the from 12th - 22nd July 2012.

Sign-up for a free poker account using the marketing code below, deposit at least $20 using the pokerstars bonus code ‘MICRO’, this offer is only valid till the 10 July 2012.

The biggest Micro Stakes Poker tournament series is back, play for your share of millions in guaranteed prize pools in the Poker Stars Micro Millions 2 tournament series. There is a special PokerStars promotion running for depositing players, make a deposit of at least $20 for a free pokerstars tournament ticket worth $3.30.

Players can use their free Poker Stars Micro Millions 2 tourney ticket to enter one of the twenty-seven events that feature a buy-in of $3.30 in the MicroMillions tournament series or satellites to larger events. Check the full PokerStars MicroMillions II schedule for the 100 events in the Micro Stakes Poker series.

There is also a PokerStars MicroMillions Main Event satellite tournament which also happens to have a buy-in of $3.30. Players can also use their free tournament ticket to satellite their way to the Main Event which has a guaranteed million dollar prize pool.

Players can register for the Poker Stars Micro Millions 2 tournaments in the lobby by clicking on ‘Events’ > ‘MicroMillions’.

Players must deposit at least $20 using the bonus code to qualify, there is no cash alternative and the ticket cannot be transfer to other players.