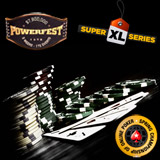 May is the best month of the year for playing poker tournaments online as the three top poker sites are all running a tournament series just before the start of the 2016 WSOP.

At PokerStars you'll be able to play for your share of $40 million in guaranteed tournament prize pools, the PokerStars SCOOP 2016 takes place between 8-22 May, wide range of buy-ins to suit all bankrolls.

There's also the Party Poker Powerfest tournament series with over $7,8 million guaranteed with 172 events running from 1-22 May, four stake levels to choose from.

This May tournament poker players have a feast of poker tournaments online to choose from with the best three online poker sites running a series at the same time. PokerStars offers the biggest guarantees with large fields of players, 888poker and PartyPoker offer a selection of tournaments with smaller playing fields and decent guaranteed prize pools.

Without a doubt the biggest online poker tournament series is the PokerStars Spring Championship of Online Poker with more than $40 million in total prize pools to be won.

The PokerStars SCOOP 2016 schedule features a wider range of poker games for low to high stake players with buy-ins ranging from $7,50 up to $5,200. There are fifty-five scheduled events available at three different stake levels.

The Party Poker Powerfest is the next biggest tournament series this May with over $7,8 million in guaranteed poker tournaments schedule over a three week period.

Following the launch of the new Party Poker Power Series tournament schedule, the Powerfest includes a selection of tournaments with buy-ins starting from $5.50 to highroller stakes.

The series is split up into for stake divisions which change each week starting from featherweight, middleweight, heavyweight and highroller.

The 888 Poker Super XL series has forty guaranteed poker tournaments adding up to more than three million including a million guaranteed Main Event.

Expect smaller playing fields with decent guaranteed prize pools, buy-ins ranging from just $5 up to $1,050 for the Main Event.

Satellites tournaments are running daily offering players the chance to win entry into the series for as little as 1¢.