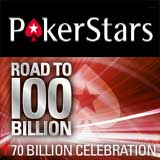 PokerStars is on the Road to 100 Billion hands dealt since 2001 so far they have had a promotion every 5 Billion hands, currently PokerStars are close to hitting the 70 Billionth Milestone Hand dealt and there is up to $750,000 in cash to be won playing cash games on PokerStars.

The 70 Billionth hand is estimated to be dealt sometime this November start playing now for your chance to randomly win loads of cash just for being dealt into the hand.

Start playing poker online, sign-up for a free PokerStars account and deposit as little at $10 to start your PokerStars bankroll. PokerStars offer players a sign-up bonus when making a first deposit, players can double their deposited amount up to $600, to clear the bonus players must earn the required amount of points within six months of depositing.

Play PokerStars cash games this November and win up to $750,000 in cash in celebration of the 70 Billionth Milestone Hand dealt. The winner of the hand will get at least $70,000 for taking down the milestone hand, plus additional cash prizes for all the players who were dealt into the hand based on their VPPs earned over their last 50 hands.

Throughout the promotion the banner on the right will update regularly and display how many hands have been dealt so far, refresh this page to keep track.

Every millionth hand dealt will be a milestone had hand here is what you can win and how the 300 PokerStars milestone hands prizes are calculated using a simple formula based on the amount of VPP's you have earned over the last 50 hands:

The winner of any PokerStars milestone hand will get at least $50 and have their total prize doubled.

The PokerStars Mega milestone hands are dealt every 5 billion hands, the player who wins the 70 billionth hand will get $70,000 added to their prizes which is also based on a formula using your VPP's earned over the last 50 hands.

The winner of the 70 billionth hand will have their prize doubled plus an extra $70,000 added.

There is no strategy to win in this promotion except to play for at least an hour before one of the hands hit so you may accumulate enough VPP's to increase the prize. Players can also try multi-tabling to increase the odds of being seated at a table where a milestone hand is dealt. Keep checking and refreshing the PokerStars milestone banners which update with the current amount of hands that have been dealt at PokerStars.