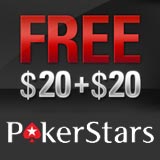 New players that have not yet made a deposit at the Worlds largest poker site are entitled to the PokerStars Bonus Free 20+20 deposit bonus, this offer runs for a limited time.

To qualify players are required to make their first deposit of at least $20, this will get them an extra $20 free play bonus which they can use to release another $20 in bonuses.

In this article we'll cover everything players will need to know about the PokerStars Bonus Free 20+20 and how to get the maximum value from it.

All new players that sign-up and make a first deposit before the 31st March, 2015 can claim up to $40 in freeplay bonuses from PokerStars. This generous offer is the biggest bonus players will get from PokerStars in 2015.

Start your PokerStars bankroll with up to $40 extra for a deposit of only $20, here are the steps to follow to get the PokerStars Bonus Free 20+20:

Once those steps are complete here is what you'll get on top of your $20 initial investment:

The first $20 freeplay is paid out without any wagering requirements and can be used play your favorite poker games on PokerStars.

PokerStars VPPs can be earned by playing any real money poker games including the new PokerStars Spin & Go where players can turn $5 into a million dollars in just a few minutes.

The first Spin and Go millionaire was announced this week on PokerStars, the prize was won by a Russian poker player who was playing the new jackpot SNG format which offers a randomized prize pool.