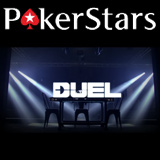 PokerStars Duel is a series of videos featuring celebrities playing heads-up poker for charity, in front of an audience of poker pros and fans.

The players are coached by PokerStars pros Vanessa Selbst, Andre Akkari, Fatima Moreira de Melo and may only use one timeout per match.

Winner of the heads-up poker match gets to choose the charity for the donation sponsored by PokerStars.

Download PokerStars - double your first deposit with a bonus matching your deposited amount up to a maximum of $600.