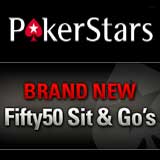 PokerStars Fifty50 is a new Sit & Go game format which is very similar to The Double or Nothing SNG games except when half the playing field has been eliminated the remaining players get their buy-in back then the remaining prize pool is shared based on a percentage of the player chip count. The new concept is a great addition to the PokerStars software providing a fresh format for Sit & Go enthusiasts.

Make your first deposit at PokerStars and get 100% bonus up to a maximum of $600 when using the 2011 PokerStars bonus code below. Players who are already signed up can take advantage of the PokerStars reload bonus to qualify for a free Fifty50 tournament ticket worth $5.24.

Sit & Go tournament players will love the new PokerStars Fifty50 SNG games, where players play down to half the playing field then the tournament ends. The remainder of the prize pool will be distributed based on the percentage of chips in each player has left in his stack. PokerStars Fifty50 tournaments can be found in the lobby by clicking 'Sit & Go' then 1-Table.

In celebration of the latest poker game, a new 2011 Pokerstars reload bonus code - FIFTY50 has been released for a limited time offer only, all players who deposit $50 or more will qualify for a free tournament ticket for a turbo Fifty50 SNG worth $5.24, deposits must be made before the 30 January 2011, tickets are only valid for 30 days after making a deposit.

Download PokerStars - get 100% first deposit bonus up to $600. Play poker online at the World's largest poker site players can deposit as little at $10, the PokerStars minimum deposit. Players can double their deposited amount when making a first deposit PokerStars will match the amount and the player can clear the bonus amount by earning the required Poker Points.

If the players was playing a $300+$17 buy-in Fifty50 Sit & Go game and the tournament ends after half the field was eliminated players would win the following prizes based on their chip stack size at the end of the tournament. The top place finishers will get their initial buy-in back plus a percentage of the remaining prize pool according to their chip stack count.

The PokerStars Fifty50 payout it based on the following formula: