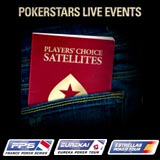 Win a Main Event prize package worth €1,500, choose which live poker events or tours you wish to play. Qualifiers for the weekly Players’ Choice satellites start from as low as €2.22, satellite your way for a fraction of the price. Players can also buy-in directly for the satellite tournament which takes place every Wednesday.

Win a PokerStars Live Events prize package worth €1,500 in the weekly Players’ Choice satellites on PokerStars. Prize package winners have a choice which Main Event they would like to play including Estrellas Poker Tour, Eureka Poker Tour and France Poker Series.

PokerStars Players’ Choice satellites can be located in the lobby by clicking on “Events” > “More” tab. Qualify for as little as €2.22 in the qualifier tournaments which run from Monday to Wednesday.

Players who have won a PokerStars Players’ Choice prize package will be contacted via email with instructions on how to register for a Pokerstars Live Event. Prize packages are valued at  €1,500 which consists of  €1,100 for a Main Event entry to a PokerStars Live Event. The additional €400 will be paid into the winners account after they have registered for the live poker tournament they wish to play, player can use this money to arrange their own travel and accommodation costs.

Please note some events are require players to be older than 21 years of age, players must meet the age requirement of the casino the PokerStars Live Event is hosted at. Players can qualify for up to 10 prize packages per year in the PokerStars Players’ Choice satellite tournaments, additional packages will be credit to the players account as PokerStars Tournament Dollars.

Players can also qualify for a Pokerstars Main Event Passport which can be used to play any of the following major live poker Main Events: WSOP, PCA, EPT, LAPT and APPT. Passports are valued at $13,000 and is paid directly into the players account and can be used for any Main Event buy-in, travel and accommodation. Winners must arrange their own tournament registration, travel and hotel accommodation.