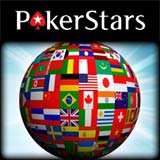 PokerStars Support Your Country by changing your avatar to the new country flags, a new feature on PokerStars. To celebrate the latest country flag avatars PokerStars have added two special freeroll tournaments with a $50,000 prize pool.

Sign-up for a free PokerStars account and get a 100% first deposit bonus up to a maximum of $600.

Players can now change their avatars to their favorite countries flag in the latest addition to the software, the PokerStars Support Your Country promotion also includes $100k in freerolls. These PokerStars freerolls are open to all players and are in different time zones to accommodate players from around the World.

New to PokerStars? Sign-up for a free poker account and Download PokerStars, play poker online at the Worlds Largest Poker site. Use Pokerstars Marketing Code 'PSP5693' when creating your account and get a 100% deposit bonus up to $600.

Choose from 205 country flags to use as your Pokerstars avatar, to change your avatar simply click on one of the banners in the PokerStars lobby. To activate your new poker avatar you can also follow these instructions:

Players can revert back to their last added PokerStars avatar at any point by clicking on 'Account' then 'Select/Change Image'.

Get your free seat to the PokerStars Support Your Country Freerolls and play for your share of $100k in prize pools. There are two PokerStars freerolls with no requirements to enter, simply register an hour before the events start.

There are also two celebratory free-to-play tournaments running as listed below, both with a huge cash prize pool of $50,000:

These Pokerstars freerolls can be found in the lobby by clicking on ‘Tourney’ then ‘Special’ tabs.

To qualify for extra points players must play the following games - ‘Hold’em’, ‘Omaha’, ‘Stud’, ‘Other’ or PokerStars Zoom Poker. Increase your point earnings by playing higher stakes or playing on multiple tables.