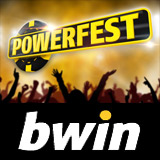 The Powerfest Bwin Poker Series is currently underway with more than $7.5 million in guaranteed prize pools spread across the 172 tournaments in the series.

The 22 day long tournament series started on 1st May and runs daily until 22nd May, 2016. The Bwin Powerfest series caters for low to high stakes players with buy-ins starting at just $5.50.

Satellite tournaments are also running offering players the chance to win a Powerfest ticket from as low as $0.01 on Bwin Poker.

Play for your share of the $7.5 million in guaranteed prize pools this May in the Powerfest Bwin Poker Series which consists of 172 guaranteed tournaments that run daily for 22 days.

The Powerfest Bwin series offers a decent selection of online tournaments including: bounties, freezeouts, turbo, re-entry and much more...

Get a Powerfest HU Mission Freeroll tournament ticket every-time you complete one of the simple missions below: