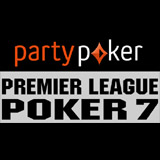 The Premier League 7 is scheduled for the 20th - 26th November 2013, the prestigious event takes place at the Playground Poker Club, Montreal.

The line-up has been announced with twelve of the top poker pros participating in the televised high stakes poker tournament.

The tournament features a buy-in of  $125,000 and attracts the best high stake players in poker, the event has six heats where players must earn points to qualify for the final table.

The PartyPoker Premier League 7 is the perfect event to create some hype leading up to the 2013 WPT Montreal which starts from 29 November at the same venue.

Support your favorite poker pros at the Premier League 7 proudly sponsored by PartyPoker.

Each of the 12 players will be required to play four heats featuring 8 players in each heat, the top four point scorers will qualify for the final table, players in 5th to 8th position will play heads-up to determine the final two places.

The televised event will have commentary will be provided by Jesse May and Kara Scott, bringing you all the stats, updates and event coverage.

The PartyPoker Premier League 7 winner of the final table will be guaranteed $400,000 for first place prize along with the title

Participating players had a draw to determine their seating positions and which of the four heats each player is assigned too. Players earn points based on their performance in the qualifying heat rounds.

The WPT Montreal kicks off as soon as the action of the Premier League ends, the popular Canadian poker series returns from 29th November – 5th December and features a buy-in of CAD$3,500 + $350.