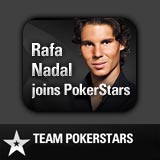 Rafa Nadal is the latest member of Team PokerStars SportStars, the famous Spanish professional tennis player who also goes by the nicknames The King of Clay and El Nino. Rafa Nadal is one of the greatest tennis players of all time winning 11 Grand Slam titles, 7 French Open titles and 2008 Olympic gold medalist in singles.

The 26 year old Rafael Nadal has admitted that he is a rookie when it comes to playing poker, being a learning player PokerStars have set up a video submission competition where players can send Rafael their poker tips to help him quickly get up to speed playing poker.

PokerStars will stand to benefit from their latest sportstar sponsoring as Nadal is Spanish and keeping in mind PokerStars have just opened legally in Spain with their fully licensed pokerstars.es game 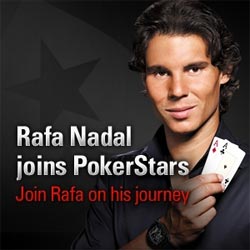 PokerStars have signed Rafael Nadal the second seed ranked player in the men’s world tennis rankings to the PokerStars Team SportsStars which amounts to the largest celebrity sponsorship in online poker to date.

Download Pokerstars and sign-up for a free poker account, use Pokerstars marketing code PSP5693, and get a 100% first deposit bonus up to $600. Pokerstars is fully licensed in Spain and offers legal online poker games to Spanish poker players.

To celebrate Pokerstars are running a Rafa Nadal contest which will help him learn to play poker. Players can win prizes for submitting their video with the most useful poker tip. The winner of the contest will get an EPT Barcelona Main Event prize package which includes accommodation and expenses, plus a Pokerstars chipset signed by the Tennis star.

There is a prize for every player who submits a video, get a free Pokerstars MicroMillions II Main Event tournament ticket worth $22.

Submit your video to nadal@pokerstars.com along with your name and PokerStars User ID.

Players can only submit one poker tip video per week, and must have a pokerstars account.