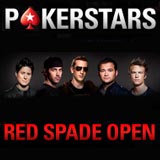 The Red Spade Open returns to PokerStars on the 12th August 2012, play for your share of the guaranteed prize pool in this million dollar poker tournament. Players can also win bounty prizes for eliminating any Pokerstars pros which includes: Victor Blom, Jason Mercier, Vanessa Selbst and ElkY.

The PokerStars Red Spade Open tournament features a low buy-in of only $55 with a first place prize of $200,000.

Sign-up for a free Pokerstars account and get a 100% first deposit bonus up to a maximum of $600.

Players can buy-in directly on the day for only $55 or satellite your way to the Red Spade Open tournament in the daily satellite tournaments.

Use your Frequent Player Points to buy-in to the Red Spade Open, visit the PokerStars store to purchase tournament tickets with your FPPs.

Support Your Country by changing your PokerStars avatar to the new country flags, a new feature on PokerStars. To celebrate the latest country flag avatars, PokerStars have added two special freeroll tournaments with a $50,000 prize pool.

WCOOP 2012 is scheduled to take place from 2-23 September 2012, start qualifying for your seat to the Pokerstars World Championship of Online Poker today. The PokerStars tournament series features 62 events spread out across 22 days including the High Roller tournament and WCOOP Main Event.