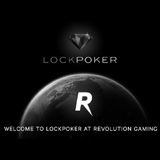 The newly launched Revolution Gaming Network is stirring up existing poker rooms that still allow US players by offering 36% rakeback that is paid out hourly and much larger than standard sign up bonuses for new players with a massive new Lock Poker sign up bonus of 200% up to $4000.

The promotions being run by Revolution Gaming are making their main rivals in Bovada and Merge gaming (Carbon Poker) look a bit dated. Merge have recently adopted a rake back plan for their players in response to Revolution Gaming’s new promotions in order to try to please their remaining players after Lock Poker departed from the Merge network.

Lock Poker was formerly one of the major brands on the Merge Gaming Network; they recently left the network then went on to buy out the Cake Poker Network and subsequently launched it as Revolution Gaming.

The re-branded network has given Revolution gaming (former Cake Poker network) a boost to 13th place according to PokerScout having already surpassed Bovada (14th) in terms of traffic.

The new Revolution Network still has some way to go in order to catch up with Merge Gaming who currently occupies the 8th spot in terms of global traffic which is the first place for USA facing poker sites.

Revolution Gaming doubled their traffic over this last weekend with the addition of Lock Poker to the network along with the steady flow of new players who have joined Lock Poker in recent days. Cake Poker who also form part of Revolution gaming have also added all players onto rakeback with immediate effect along with bigger sign up bonus codes, changes that all current Cake Poker players will welcome as will new joining players.

USA poker players who are looking for a new venue to play online at may just want to give Lock Poker a try as they seem very eager to get a massive share of the American online poker market.

Revolution gaming consists of several skins with the main ones being Lock Poker, Cake Poker and Intertops.  Revolution Gaming is also Mac compatible after an upgrade was rolled out at the same time as the name change took place.

It certainly is pleasing to see some competition in the US online poker market and that several rooms have been dodging the DOJ while still managing to receive US deposits and make payouts to Americans despite the closure of several large poker sites including the like of Full Tilt Poker and PokerStars.

If Revolution Gaming somehow maintains their pace they certainly could become holders of the first spot in American facing Poker rooms.

Lock Poker offer 24/7 live chat support for any issues that may arise in claiming your Lock Poker bonus.