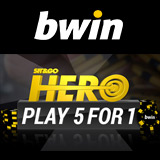 Take advantage of the Sit and Go Hero promotion on Bwin Poker and get one free tournament ticket if you play five Hero SNG tournaments.

The value of the tournament ticket is random and you'll receive a ticket ranging from $1 up to $20. The Sit and Go Hero promotion 5for1 special can only be claimed once per customer on Bwin Poker.

Sit & Go Hero tournaments launched earlier this month on the Bwin.Party network and is similar to Spin n Go on PokerStars but with a unique twist, it's four handed and a bounty tournament.

The jackpot SNG tournament gives players the chance to randomly win up to 10,000 times their buy-in amount plus a randomly selected bounty prize on one of the registered players heads.

For example you could play five Hero SNG's at a $1 buy-in and get a tournament ticket up to $20 for FREE! Each player can only claim this offer once within the promotional dates which end on 30 April, 2016.

The latest craze in the poker world is SNG jackpot tournaments, recently both PartyPoker and Bwin launched their version of new poker format with a twist.

The four-player Sit and Go Hero tournaments feature buy-in ranging from $1 up to $20 and give players the chance to win up to 10,000 times their buy-in amount.

The prize pool is randomly determined by a multiplier which is revealed just before the tournament begins. As an added bonus the tournaments are also bounty tourneys, at the start of the tournament one player will also be randomly chosen to have a bounty prize on their head.

The Sit and Go Hero tournament payout is structured on a winner-takes-all format unless the prize pool is more than 100 times the buy-in amount.