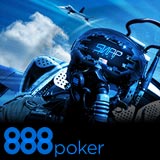 Something EPIC will be announced at 888poker on 24th April, in the meantime players can play the daily Sky Rocket Freeroll with a $2,000 prize pool.

The $2,000 Sky Rocket Freeroll tournaments run three times daily and is open to all players who have made a deposit at 888poker. Depositors will be able to register for all the freerolls without needing to earn a tournament ticket.

Take advantage of a special Instant Poker Bonus promotion running at 888poker until the 22nd of April. Double your deposited amount instantly up to $10, deposit $10 and play with $20.

Players can enjoy three daily $2,000 Sky Rocket Freeroll tournaments running between 10th-22 April 2014, while we wait for something EPIC to be announced at 888poker.

That's $6,000 daily in total freeroll prize pools to be won for free for all depositing players at 888 Poker.

Registration is available two hours before the tournament starting time, players can register for the event in the lobby under the tournaments tab.

No tournament ticket is required to register, the freeroll is open to all players who have made their first deposit of at least $10 at 888poker.

There is not enough information available at this stage as 888poker builds the hype for their next EPIC promotion. Players are advised to check their email on the 24th April for the big announcement.

The image for the promotion features the Snap Poker logo so it may be a promotion for their fast fold poker variant.

In 2012 the poker site announced that Something Big was coming to 888poker and it turned out to be the 888Poker Freeroll Frenzy promotion with a daily $10,000 freeroll.

We don't want to speculate to much but are sure the latest 888 poker promotion will be as EPIC as they have been in the past. 888poker already offer an attractive deal for new players, sign-up and get free tournament tickets and cash.

Being one of the biggest and best online poker sites, 888 poker have a no deposit poker bonus for new players to checkout the poker software and promotions.

Download 888Poker and sign-up with a valid email, the promotion is limited to players from selected countries. For more information see the 888 Poker Free $88 Bonus page.