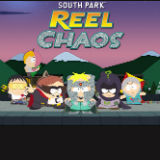 The new South Park Reel Chaos Slot will be released on the 23rd October 2014 and should be available on Winner Casino soon after.

Earlier this year WinnerCasino formed a partnership with gaming developers NetEnt who will provide a new selection of games which include: South Park Reel Chaos, The Wish Master, Lights, Aliens, South Park and Twin Spin.

The Reel Chaos Slot is a sequel to the first South Park slot which can be played for fun or real money.

South Park fans will definitely enjoy this themed slot game and it can be played for free in play money mode.

The Cartman Stacked Wilds feature is randomly triggered while playing the slot, stacked wilds are created as Cartman climbs up and down the reels.

Don't let Professor Chaos kill Kenny in a bare handed wrestling match and get up to a five times multiplier.

The Kenny Multiplier is awarded when Mysterion and the Professor Chaos start fighting while spinning the reels, get a three, four or five times multiplier added to the bet line.

Kyle must prevent Professor Chaos from unleashing evil hamsters upon the World using special laser vision powers to blast them back into the Cages of Doom.

The Kyle Wilds feature is randomly triggered during gameplay as Kyle removes the vermin he creates between 3-5 overlaying wild symbols for players to win big.

Stan also known as Toolshed has a special ability to control power tolls with his mind and uses his skills to save the World.

The Stan Re-Spins is randomly triggered after a non-winning spin, players will get a re-spins with a special multiplier ranging from 2-10 times the bet line.

Hit three bonus symbols anywhere on the first, third or fifth reel to trigger the epic bonus spins stage where Mintberry Crunch must defeat his enemies.

There are four enemies which must be defeated to increase the bonus multiplier, deafeat all four for a four times multiplier.