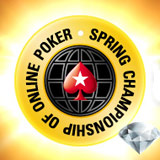 The annual PokerStars Spring Championship of Online Poker 2015 returns from 10-24 May with $40 million in guaranteed prize pools.

The online poker series features three different stake levels of every event which is gives players of all bankroll levels an opportunity to play the series.

There is also a SCOOP Main Event for each stake level which guarantees a combined total of $7 million in prize pools.

Satellite tournaments will be running daily giving players the chance to win their entry into all events in the series for a fraction of the direct buy-in amount.

Spring is here and so is the PokerStars Spring Championship of Online Poker 2015, players get ready for a jammed-packed tournament schedule. There are forty-six scheduled tournaments in each stake level of the PokerStars SCOOP 2015 adding up to a total of 138 tourneys.

The winner of each 2015 SCOOP tournament will receive a Movado watch as their bracelet prize for the event on top of their cash prize winnings.

Players of all stake levels will be able to choose from a great selection of tournaments and game types, there are at least 3-4 tourneys scheduled daily.

Play for your share of more than $40 million in guaranteed prize pools between 10-24 May. Start qualifying now in the daily satellite tournaments which start from as low as $0.11 or 1 FPP.

PokerStars have also introduced a way for players to win a tournament ticket to the 2015 SCOOP Main Event worth $10,300.

To qualify for the SCOOP All-in Shootout tournaments players must make a deposit to get their raffle ticket. The tournament requires no poker skills as all players are all-in every hand until the last player remaining claims the prize.

Deposit at least $25 using the deposit bonus code before the 21 May to qualify for a ticket to the SCOOP All-in Shootout tournament.

On top of all the guaranteed prize pools, players can also win additional prizes but participating leaderboards. Whenever a players cashes in a SCOOP event they will also earn leaderboard points for each stake level of the series.

There is also a Player of the Series prize for the player who scores the most cashes and leaderboard points during the series.