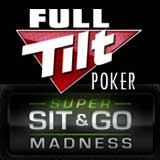 Play the Super Sit & Go Madness promotion at FullTiltPoker this weekend and win extra cash, prizes and Super Madness freeroll tournament tickets. Win your share of $150k in cash prizes plus 1000 prizes from the Full Tilt Poker store to be won by playing SNG games on FullTilt Poker from 7th – 9th January 2011.

The Madness weekend will be split into 24 blocks which run every two hours there are leaderboards running at four different buy-in amounts, the top 7 players will win cash prizes based on these buy-ins.

Players can also win cash prizes for each buy-in group for accumulating the most points in a two hour period over the entire weekend, the top two players in each group will get entry to a $5,000 Full Tilt Poker freeroll tournament restricted to a total of 8 players which pays out the top 3 places.

To qualify for the Super Sit & Go Madness players must play SNG games which are highlighted in green, the games include Single Table tournament, turbo SNG and super turbo SNG. The Super Turbo games are fast paced and players start with only 300 chips, these games run for about 15 minutes before they are completed.

Win your share of the 1000 prizes up for grabs in the Full Tilt Poker raffle, to qualify for each entry into the draw players must finish in the top 3 place in a 9 player SNG or top 2 places in a 6 player SNG. Players can win Full Tilt Poker gear from the store which includes a Deluxe Home Game Package, tournament tickets, shirts and caps