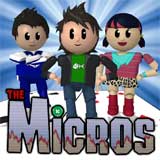 The Micros is a popular animated comedy series based on online poker, the plot is based on three main characters Chase, Rose and Tommy. The comedy poker show features the characters on their quest from micro stakes poker to the big time with a series of web episodes, specials, minivids and music videos on YouTube.

The show was originally presented by Full Tilt Poker prior to Black Friday, it's just a question of time before another network steps in to sponsor the show.

The writers of the show Jay Rosenkrantz & John Wray plan to release the series in HD DVD version.

Chase Berger aka Swedetooth plays in the Sunday Mega million tournament for $1,2 million dollars, we are introduced to the other two characters Rose and Tommy.

The Micros - Episode 3: One Flew Over the Kookaburra's Nest

Rose gets help for her gambling addictions at ELKYTRAZ the asylum for the criminally degenerate, while Chase plays the Aussie Millions and is the first player eliminated from the tournament.

The Micros - Episode 4: Heads Up 4 Röfls

The Micros - Episode 5: Countdown to Busto

Tom Dwan (Durrrr) give Chase some tips on how to defeat Max Röfls at Heads-up.

The Micros also have special episodes released in between the regular series, here are all the latest videos.

A music video dedicated to Erik Seidel and his amazing run in 2011.

The Micros plan to get staked for the WSOP, they contact all the pros on their contact list. Pros featured in this episode include: Barry Greenstein, Phil Laak, Jennifer Tilly, Antonio Esfandiari, Vanessa Selbst, Kara Scott and Huck Seed.

The Micros Minivids are special episodes released for special occasions like holidays or certain events taking place in the poker world.