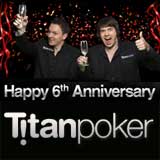 Titan Poker celebrate their 6th Anniversary this September and welcomes all players to join in the celebration by offering some great promotions the entire month. Qualify for the Titan Poker Heads-Up Championship, Titan Poker Anniversary Freeroll with a $6,000 prize pool, play poker online against Team Titan Pros Sam Trickett & Marvin Rettenmaier, plus loads of mystery giveaways every week.

Get a 200% bonus up to $2,000 at TitanPoker, sign-up and use the Titan Poker Bonus Code below for the biggest first deposit bonus.

Titan Poker are celebrating their birthday in style and rewarding players with extra prizes in four poker birthday promotions which include a Heads-Up Championship where players can qualify in the cash game races, there will be an anniversary freeroll with a $6,000 prize pool, put your skills to the test and win bounty prizes for knocking out Team TitanPoker pros Sam Trickett and Marvin Rettenmaier, players can also win mystery prizes each week.

As part of Titan Poker’s 6 Year Anniversary they are running a Heads-Up Championship which is split up into two phases. Players must qualify for their seat to the Heads-Up Championship by participating in the 24hr rake races, each race only last one day and run every Tuesday and Sunday from 4th - 27th September. Players are split up into different VIP levels and divisions to rank in the leaderboards to win cash prizes.

Team Titan Poker pros Sam Trickett and Marvin Rettenmaier will be playing at the cash games tables, players can put their skills to the test against the pros. They will be playing three different stake levels $0.10/$0.20, $1/$2 and $10/$20. There will also be a $200 bounty on their heads in the weekly $200,000 Guaranteed tournament.

Take part in the 6th Anniversary Titan Poker Freeroll where players can win their share of a $6,000 prize pool. To qualify for a free Titan Poker freeroll token, earn 60 Points or more this September playing poker online at TitanPoker.

Want your share of the prizes in the mystery week giveaways at TitanPoker? Better sign-up to find out what prizes can be won every week throughout September.