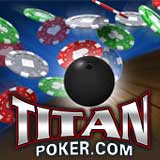 Titan Poker are running a Sit n Go League this March with $25,000 in cash prizes to be won playing TitanPoker SNG games. Enter the weekly poker league and get your share of $4.000 for the top  10 in the leaderboard each week. The League will be split into three different categories based on the buy-in amount.

The top 200 players in the TitanPoker league will get entry to the weekly Tournament Race.

Get a 150% deposit up to $600 when using our Titan Poker bonus code WAP, we offer a bigger deposit bonus than what is available from Titan Poker online. Titan Poker minimum deposit $20 get an additional instant free $25 added to your bankroll.

Leaderboard ranking is based upon SNG tournaments the player has won in each league group/buy-in amount.

TitanPoker Heads Up, Double Up and Triple Up SNG tournaments will not count towards the league leaderboard.