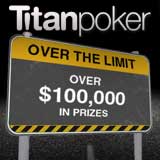 The TitanPoker Over The Limit promotion is a raked hand race where players can win their share of $100,000 in prizes which include cash and tournament tokens. The promotion runs from the 31 October - 11 December 2011, players must rank in the top places in the leaderboards by raking the most hands playing Limit Holdem cash games.

The top 400 players will also get entry into the freeroll where there are 50-seats guaranteed to the Grand $15K Limit Hold’em poker tournament worth $100 + $9.

If you're new to Titan Poker sign-up and get one of the best poker bonuses in the industry 200% first deposit bonus up to $2,000 when using the Titan Poker bonus code.

Sick of No Limit Holdem or just need a break from it? try playing some other online poker games, Titan Poker are running a Limit Hold'em promotion where players can win $100,000 in prizes from the 31 October - 11 December 2011 in the Titan Poker Over The Limit promo. Prizes include cash, freeroll entries and tournament tickets.

The Over the Limit promotion runs for six weeks and is divided into 3 cycles which run for two weeks. Each two weeks features four different leaderboards for all stake levels where players can rank in top places by raking the most hands playing Limit Holdem games on TitanPoker.

Each cycles runs for two weeks from Monday to Sunday and run on the following dates.

Over The Limit Leaderboard

With $100,000 in prizes to be won in the Over The Limit TitanPoker promotion, start playing for your share of the prizes by raking as many Limit Holdem hands as you can during the promotional dates.

There are four different Over The Limit leaderboards from Micro Limit Poker games up to High Stakes games. The top players in each leaderboard will win cash prizes based on their position and there are also 400 TitanPoker freeroll tournament tokens up for grabs.

The 400 Titan Poker freeroll tournament tokens can be used to enter the 50-seats guaranteed freeroll where the top 50 players win entry to the Grand $15K Limit Hold’em poker tournament prize valued at $100 + $9.

Over The Limit Leaderboard Cash Prizes