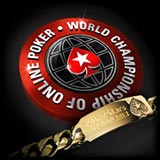 The WCOOP 2013 schedule has been released with sixty six guaranteed tournaments in the PokerStars series taking place between 8th-29th September 2013.

This is the 12th edition of the PokerStars World Championship of Online Poker which started back in 2002. Each year new events are added and the guaranteed prize pools increase, the 2013 WCOOP guarantees a total of $40 million.

Satellite tournaments are running daily and a WCOOP reload bonus code will be available for players wanting to reload their accounts for the annual PokerStars series.

Players can win additional cash by ranking in the tournament leaderboards that track players scores throughout the online poker series.

Players can start qualifying for all the World Championship of Online Poker series by playing satellite tournaments to win seats for a fraction of the direct buy-in amount.

See below for the full 2013 World Championship of Online Poker tournament schedule for events on PokerStars.