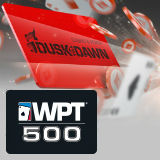 The WPT 500 UK tournament is scheduled from 11th-16th November  at the Dusk Till Dawn Poker Club, Nottingham, UK.

The £500 buy-in tournament offers a guaranteed £1,000,000 prize pool in a unique re-entry tournament. Re-entries are allowed once per day during the four starting days of the WPT 500 UK.

PartyPoker have added a series of qualifying routes for players to get their entries for the WPT 500 UK, start qualifying for free in the daily WPT500 UK Freeroll and WPT500 UK Satellites.

Qualifiers run from 4th August up until 2nd November, players can win multiple entries for all the starting days of the World Poker Tour UK event.

Qualify for the WPT 500 UK Dusk Till Dawn tournament exclusively online at PartyPoker between the 4th August to 2nd November 2014.

Players are allowed one re-entry per day during the four starting days of the WPT 500 UK Dusk Till Dawn tournament. Party Poker are the official sponsors of the World Poker Tour and offer exclusive satellites to all the WPT live events.

WPT500 UK Satellites are running starting from just $1 or go directly to the final satellite for only $50.

Players can win up to four entries for the WPT 500 UK live tournament during the PartyPoker promotional dates. Any unused entries can be exchanged for tournament dollars or transferred to another players.

Players must be older than 18 years of age, the age requirement of the Dusk Till Dawn Poker Club. Winners are responsible for arranging their own transportation and accommodation to play the WPT 500 UK, Nottingham.