The WSOP 2009 final table was full of action this year and the main event winner Joseph Cada has now claim the 2009 main event bracelet when he defeated Darvin Moon in the heads-up stage of the 40th anniversary WSOP event.

Twenty-one year old Joe Cada has won the WSOP main event, although Cada has already cashed eleven times in WSOP events. Joseph Cada was the short stack going it to heads-up with Darvin Moon having almost a double stack lead.

UK player James Akenhead was the first to be sent to the rail with Kevin Schaffel's pocket nines holding up against Akenhead's pocket threes sending Akenhead out in Ninth place earning $1,263,602. Kevin Schaffel is then eliminated in 8th place, 20 minutes after Akenhead, when his AA got beat by Eric Buchman KK when the king flopped and another king on the turn giving Eric Buchman four of a kind kings.

Next eliminated was the favorite Phil Ivey from Team Full Tilt Poker who was knocked out by Darvin Moon, Ivey had AK vs Moon's AQ unluckily for Phil Ivey a queen flopped sending to the rail in 7th place. Darvin Moon knocked out Steve Begleiter in 6th place when Begleiter's pocket queens got beat by Moon's AQ with a lucky Ace on the river for Darvin.

Jeff Shulman finished in fifth place when his pocket sevens were beat by Antoine Saout cards A-9 with a nine flopping giving Saout the higher pair. Eric Buchman was out next in fourth place with A-5 vs Darvin Moon's K-J followed by Antoine Saout who was eliminated in third place with pocket eights against Joseph Cada's A-K with a king coming through on the river card. It was then down to the final two heads-up with Darvin Moon vs Joe Cada. 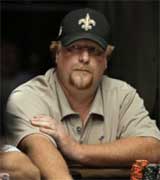 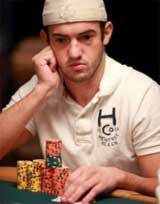 Joe Cada raises to $3,000,000 and Darvin Moon calls, the flop reveals Tc 5d 9h. Both players check and a Td is dealt on the turn and Darvin Moon goes all-in, Joe Cada calls with Jh 9d against Moon's 7s-8s Joe Cada wins the hand putting him in the chip leader position.

Joe Cada plays online at PokerStars under the user name jcada99 which is quite ironic since pocket nines was his winning hand. His tournament cashes are quite impressive and he was warming up online for the final table on on the 1st November and made more than $7,000 in one day.

Cada's biggest tournament cash online at PokerStars was the 6th September 2009 when he won first place in a $1,050 buy-in event with 712 players and earned $128,827 for his first place finish.

Join Joe Cada and Team PokerStars online, sign-up and start your bankroll today from as little as $10 for minimum deposit PokerStars offers a 100% first deposit bonus up to $600 when using the PokerStars bonus code STARS600