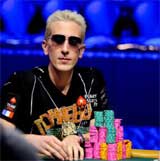 PokerStars Bertrand Grospellier ElkY has won his first WSOP bracelet in event #21 Seven-Card Stud World Championship, this was the first time Elky had ever played in a 7 Card Stud tournament. The PokerStars French Pro has already won an EPT and WPT title and more than $7 million in tournament earnings in his career but the WSOP bracelet is one of the biggest accomplishments in poker.

Elky was also a pro gamer on the StarCraft Team who then focused his attention to online poker and then live poker and become a member of Team PokerStars Pros.

The first place prize was $331,639 although winning a WSOP bracelet is worth far more to ElkY than the prize money.

The 2011 World Series of Poker has had more entrants than most of the events in 2010 despite the fears of a drop in attendance resulting from Black Friday. Some events had a record breaking amount of players entering for WSOP side events with most of the events having bigger playing fields than last year.