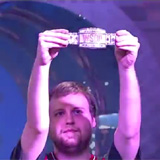 The WSOP 2015 winner of the World Series of Poker Main Event is Joe McKeehen who dominated the WSOP final table as the chipleader of the November Nine.

McKeehen played seamlessly making perfect decisions on almost every hand he was involved in, reading his opponents with a stare that shattered their confidence.

Almost every hand he saw to the river he the best hand or knew when to fold when he didn't, On the Final Table he eliminated six of his eight opponents: Patrick Chan, Federico Butteroni, Pierre Neuville, Max Steinberg and Josh Beckley.

Joe McKeehen the WSOP 2015 winner victory earned him $7,683,346 for first place prize along with the title and bracelet.

At the age of just 24 years old the professional poker pro from Pennsylvania, Joe McKeehen has been crowned the 2015 WSOP Main Event champion.

As an 888 poker sponsored player on the WSOP final table McKeehen has proved that he was without a doubt deserving of the victory. He has already cashes on eight other occasions in world Series of Poker events.

His play in the WSOP Main Event final table was a perfect combination of skill and luck, on multiple occasions his pocket sixes turned into sets and even random hands became two pair. Even Daniel Negreanu couldn't believe how often McKeehen would have the best poker hand and was running like a god.

The final three players were Neil Blumenfield who was eliminated in third place leaving Joshua Beckley heads-up against Joe McKeehen for the title. Beckley the 25 year from New Jersey also played phenomenally as he was one of the short stacks at the start of the final table who finished as the runner up bagging more than four million dollars.

For more information see the WSOP live updates from the final table of the Main Event 2015.