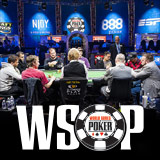 Poker hand analysis with David Baker and Joe Cada in the booth and commentator David Tuchman. The 2015 World Series of Poker is sponsored by 888poker, where the World play online.

Watch the playlist of five videos of the 2015 WSOP Colossus Final Table, all the action with only nine players remaining.

There were a total of 22,374 buy-ins from 14,284 registered players making the event a WSOP record for biggest single event.

Out of the playing field almost 40% of players had never played a WSOP event but due to the low buy-in it was affordable for most players to enter.

There was a lot of controversy around the WSOP Colossus payout structure as it paid out 10% of the field which was 2,241 players in the money. This resulted in a first place prize of only $638,880, far less than what it would have been if they had used a standard payout structure.

The World Series of Poker also received criticism for the amount of rake ($1,454,310) taken was more than the first place prize.

For more information about the 2015 WSOP Colossus see - wsop.com