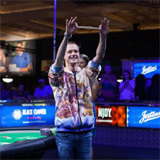 Watch the WSOP Millionaire Maker 2015 Final Table with the 9 remaining players battling it out for a million first place prize and WSOP bracelet.

Watch the final table of the WSOP Millionaire Maker 2015, there are nine videos in the YouTube playlist below. There is about nine hours of footage from the final table broken up into one hour segments.

“I really didn’t think I’d be here, I mean, getting through 7,000 people. It’s not something you think about until it happens. I hoped to run super deep, and knew I had the skill to get here. But it’s just surreal to live out the dream.” - Adrian Buckley

Adrian Buckley won the event which was also his first in-the-money finish that came with a million dollars and WSOP bracelet. The Millionaire Maker had the 2nd biggest playing field in the 2015 World Series of Poker, the first being the 2015 WSOP Colossus event.

The most notable players on the final table were Erick Lindgren and Mike Sexton, other players who cashed in the event include: Hoyt Corkins, Justin Bonomo, Brian Rast and Jeff Madsen.