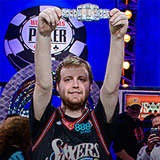 All those who have made a deposit since opening an account on 888poker will be able to register for the free tournaments with a $10,000 prize pool.

The WSOP Winner Celebration tournament takes place on 12 & 13 November all eligible players will be able to register for tournament in the lobby.

To celebrate Joe McKeehen's victory in the 2015 WSOP Main Event 888poker are running special $10,000 free tournaments for his massive achievement.

888poker have been very generous by adding two WSOP Winner Celebration tournaments for registered players who have made at least one deposit at 888poker since signup.

New players can join in on the action by signing up and making a first deposit of at least $10, depositors will also get a special bonus and free tournament tickets to the latest 888poker promos like the Gift Showers promotion.

There were three November Nine players who were sponsored by 888poker on the final table all of them had pretty impressive results. Joe McKeehen was the WSOP 2015 Winner of Main Event, Neil Blumenfield finished in third place and Tom Cannuli in sixth place.

For more information and results from the 2015 WSOP final table click here.