The World Series Of Poker Europe (WSOPE) have set their schedule for 2009, the event will be hosted by BetFair and will run from 17 September through to 1 October 2009 the is set at Leicester Square, Casino at the Empire in London.

In this third series of WSOPE, John Juanda will be looking to defend his 2008 WSOPE main event title for the coveted tournament that offers a total of four gold bracelets which are highly desired items amongst top competing professional poker players. The tournament is bound to attact many of the top names in the game as it has done in the past with television broadcast rights given to ESPN.

Players looking to enter the event can do so at London Clubs International venues or at the Rio, Las Vegas throughout the 2009 WSOP satellites will be running from 9 July until 11 July at the Rio.

The first WSOPE held in 2007 was won by 18 year old teen Annette Obrestad winning a massive £1 million and the championship title. 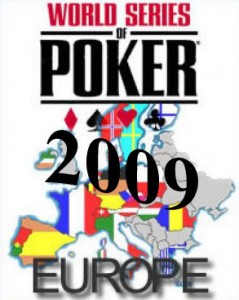