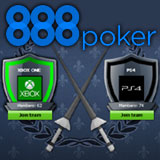 A special Teams Poker tournament Xbox One vs PS4 is open for registration on 888poker, the top player in each team will win a console based on the team they have registered for.

The buy-in is only $5 which is a real bargain to win your favorite gaming console on 888poker.

The Xbox One vs PS4 tournaments are scheduled for 29-30 November, at this stage it's uncertain whether if this is a once off promotion or a regular weekend event.

Don't miss your opportunity to win in 888Poker Teams Poker tournaments where players must join a team and battle it out for the prizes on offer.

New players get a special 888 Poker Free $88 Bonus when sign-up with no deposit required.

888Poker have added the Next Generation gaming consoles as prizes in a special edition of the Teams Poker tournament this Weekend.

Here is your chance to get your favorite choice in gaming consoles in a poker tournament with a low buy-in of only $5.

To get in on the action players must complete the following to participate:

There are two 888 promo codes available, one for players making their first deposit and another for players who have already deposited, make sure you use the correct promo code when depositing at least $30.

Players that make a deposit will be issued two tournament tickets to participate in both Xbox One vs PS4 TeamsPoker tournaments on 29-30 November 2013.

Qualifying players can use their tournament tickets to register for the events which are located on the Teams tab in the 888poker lobby.

Teams Poker tournaments are exclusively available on 888Poker, the unique concept allows players to choose a team when registering for a tournament.

Players can select one of the many themed tournament such as countries verse countries, popular sports events and many other exciting opportunities to win cash and fantastic prizes.

When cash is the prize, players will have two chance to win with a percentage of the prize pool dedicated to the winning team with the highest score and individual prizes for finishing in top positions in the tournament.

All prizes are clearly stated on the registration screen in the lobby so make sure you know what can be won before registering for any Teams Poker tournament.